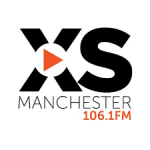 XS Manchester is a radio station based in Salford, Greater Manchester broadcasting a variety of peak-time news, rock music and talk output.
The station began test transmissions as 106.1 Rock Radio on FM on 10 April 2008. The transmitter is on top of the City Tower (the former Sunley Building) in Piccadilly in Manchester, the same place as Capital Manchester and Radio X’s transmitter and all 3 services share the same broadcast antenna system which is located on the centre transmission tower and is illuminated with red Aircraft warning lights at night.