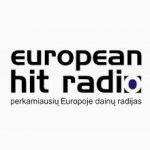 European Hit Radio (EHR) is one of the very first commercial radio stations in Baltic States. This radio focuses on reflecting the current situation in European music charts. Every week the European Hit Radio servers automatically check each European country’s single charts, index songs in order of their position on the chart and, with a special secret script, automatically make a playlist. This script is programmed to manage the playlist so that one can turn on the radio at any time and, in a few hours, know the current situation in the European music market — what music is most popular in Europe right now. The script also can avoid repeats of the most popular song and make the playlist very interesting. That is why the station’s name is European Hit Radio.
EUROPEAN HIT RADIO Eiropā pirktāko dziesmu radio Rīga 104.3 | Talsi 100.8 | Kuldīga 107.4 | Liepāja 96.1 | Cēsis 99.2 | Gulbene 88.4 | Madona 102.0 | Ventspils 101.9 | Valmiera 102.4 | Saldus 93.6 | Valka 96.2 | Jēkabpils 98.4