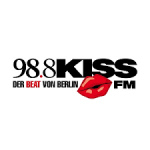 98.8 KISS FM — der Beat von Berlin!
KISS FM 98.8 is a privately owned radio station broadcasting to Berlin and parts of Brandenburg on 98.8 FM MHz specialising in R&B, dance, hip hop and pop. It also broadcasts via analogue cable in Berlin and Brandenburg on 97.90 MHz and nationwide via DAB+.
KISS FM started its broadcasts from Voltastraße in the locality of Wedding in January 1993. It was named after the New York radio station 98.7 Kiss FM which was one of the first stations to play rap music regularly, catering only to an African-American audience. The vision of the Berlin adaptation was to play «underrepresented music». The broadcasting license for KISS FM was tied to certain requirements which are still in force today. KISS FM must air a program with music and spoken word which focuses on all fields of young life in Berlin, especially vocational training, work, leisure time and youth-related problems. Furthermore, the program must be socially engaged, react to current trends and put an emphasis on the integration of minorities living in Berlin.