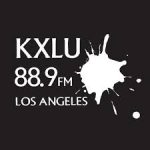 KXLU 88.9 FM is an FM radio station broadcasting out of Loyola Marymount University in southwest Los Ángeles, California. It was first on the air in 1957, and in 2007, celebrated its 50th anniversary. It is a non-commercial college radio station that plays many styles of music broadly classified under rock, specialty, fine arts, alternative music and Latin jazz. KXLU has a small, cult following among music fans in the general Los Ángeles metropolitan area.